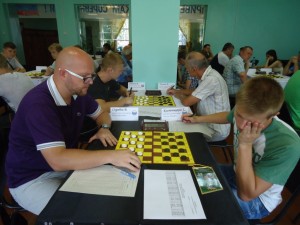 The competition is open to all players, regardless of age and rating, with a sport category not less than candidate for master of sports, who paid the entry fee and registered. The number of participants representing the country is not limited.

Competitions will hold on the Swiss system in 9 rounds according to the FMJD rules.

Competitions will hold in the Russian version of draughts-64 by the system of micro-matches consist of 2 games in the two types of programs: the classic game and the blitz game. All types of the program will be played with the drawing according to the official tables of the Draughts Federation of Russia. At the tournament will be set a norm of master of sports of Russia and Grandmaster of Russia.

Necessary to confirm participation in the competition no later than July 20, 2012 to Gaidukov Andrey (vice-president of the Draughts Federation of Leningrad region) by phone +7964398877 or e-mail [email protected]