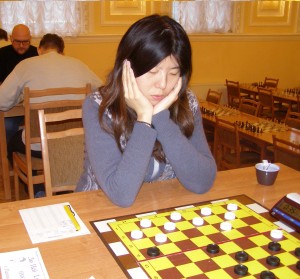 Liu Pei was the best among women. 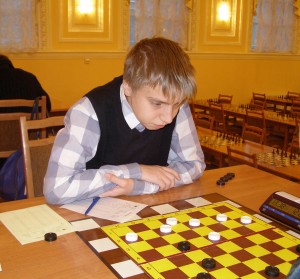 He goes to school with intensive study of the English language.

Dmitry showed very good results in this tournament and performed the norm of National Master.

Belosheyev Sergey lead in the World Cup after 8 rounds with a score of 14 points out of 16.

Vladimir Skrabov is in second position with a score of 13 points out of 16. 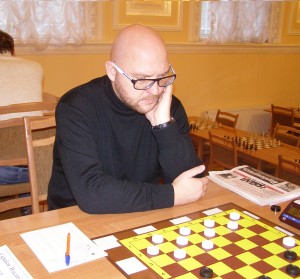 GMI,  current rating 2421 (eleventh in the rating list for men)

Belosheyev Sergey lead in the World Cup after 7 rounds with a score of 12 points out of 14. 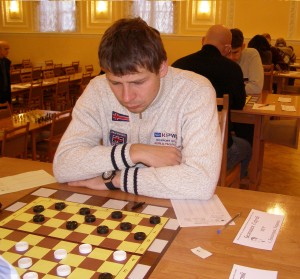 GMI,  current rating 2486 (first in the rating list for men)

Vasily Sokov, one of the greatest players of draughts-64, USSR champion in 1938-41 years, was born December 26, 1912, died March 3, 1944 in the Battle of Narva. December 26 marks the 100th anniversary of his birth. See more information about Vasily Sokov and photo HERE  and HERE

The Section-64 FMJD in accordance with the calendar of the Section-64 competitions in 2012 from 09 December (day of arrival) to 17 December (departure day) in St. Petersburg (Russia)  holds international competition dedicated to the 100th anniversary of birthday Vasily Sokov — Final of World Cup in draughts-64.

1.   Goals and objectives.
Competitions are held in order to:
— Promotion and development of draughts;
— improvement and respect for international titles;
— the reveal of the winner of the World Cup 2012;
— The strengthening of friendly relations between the draughts players from different countries.

2.  The place and time of the competition.
Competitions are held in SDUSSHOR of Chess and Draughts at:
St. Petersburg, Bolshaya Koniushennaya, 25 (metro station «Gostinny Dvor», facing Canal of Griboyedov) from 09 December (day of arrival) to 17 December (departure day) 2012.

5.  The competitors.
The participation in the competition among men and women is allowed for the players who have rank not lower than «Candidate of Master», in the youth competitions — players born no later than 1996, who paid the entrance fee and registered in accordance with this regulation time. The number of participants representing the country is not limited.

Langina Antonina, tel. + 7 921 7777231, e-mail [email protected]
Information about the tournament will be posted on site of Draughts Federation of St. Petersburg www.fed-shashek.spb.ru and Section-64 site www.fmjd64.org