Posted on Friday December 18th, 2015 by Vladimir Langin
Comments off

Comments of the games from Kondrachenko

Comments of the games from Tsinman 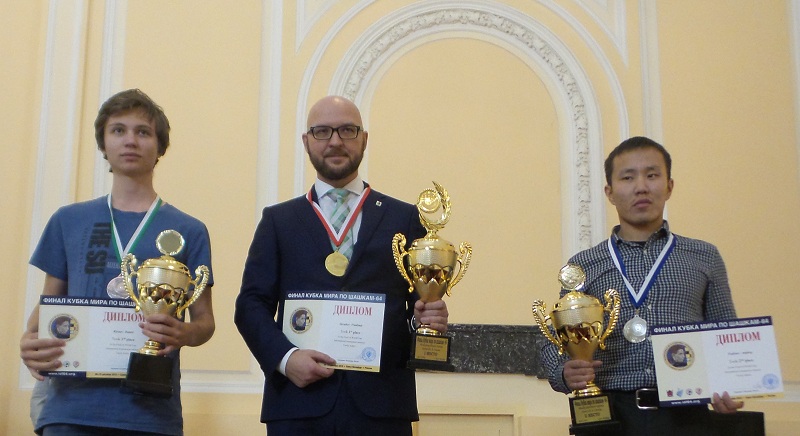 Strong international grandmasters Evgeniy Kondrachenko and Dmitriy Tsinmansend reports with comments of the games of tournament.

All the leaders have played draw in the final round. Vladimir Scrabov became the champion of the World Cup final. Andrey Fedotov took second place. Damir Rysaev took third place.

Before the last round Scrabov Vladimir lead with 13 points. Fedorov Andrey, Tsinman Dmitriy Rysaev Damir and Belosheyev Sergey have 12 points.

Two rounds in World Cup was held today. Scrabov Vladimir won in the 7th round and with 12 points became the leader of the tournament. Rysaev Damir,  Fedorov Andrey, Tsinman Dmitriy and Belosheyev Sergey have 11 points.

Scrabov Vladimir won in the 5th round, and together with Fedorov Andrey leads with a score of 9 points.

Competitions will start in one week. Participants will be able to take part in the open rapid championship of St. Petersburg, which will be held on 6 December from 14.00.

Vasily Sokov, champion of the USSR 1938-41′s, was born December 26, 1912 in Yaroslavl region, died March 3, 1944 in the Battle of Narva. Most of his life he lived in Leningrad. Vasily Sokov was a very strong player, magician of draughts, the founder of the progressive Soviet school of draughts  art, consummate theorist and innovator, humble and helpful people – so he will remain forever in the hearts of lovers of our folk game. International draughts tournament memory Vasily Sokov are held in St. Petersburg for many years as a tribute to the memory of a champion.

Competitions are held from December 06 (day of arrival) to December 13, 2015 in St. Petersburg (Russia) in State budget educational institution of additional education “SDYUSSHOR in Chess and Draughts” at: St. Petersburg, Bolshaya Konyushennaya str., 25 (metro station “Gostinny Dvor”, facing Canal of Griboyedov).
Credentials Committee will work December 06, from 16.00 till 20.00.
All participants must have medical insurance for the period of competition.

All participants are allowed to participate in World Cup regardless of gender, age and rating who timely filed an application, registered on time and pay the entry fee. The number of participants representing the country is not limited.

In youth tournament boys and girls born no later than 1999 are allowed to participate, who timely filed an application, registered on time and pay the entry fee.

Competitions are held on the rules of the International Draughts Federation IDF.
System of competition is Swiss.
All programs are held in Russian version by the system of micro-matches consist of two games.
Final of of World Cup is held with draw according to the official table of the Section-64.
Youth competition is held in classic Russian draughts without draw of the moves.

Places of participants are determined by the biggest amount of points.
In the team classification – by the biggest amount of points scored by all team members.
In case if result of two or more participants is equal, the additional criteria established by the panel of referees in accordance with the rules of the International Draughts Federation IDF.

The prize fund in the Final of World Cup to be announced, but will be not less than 1000 Euros.

Overall standing of the World Cup

All costs of participants paid by the sending organizations or yourself.
The organizing committee pays all costs for the organization and conducting of the competition.

Applications for participation must be submitted to the office of the International Draughts Federation not later than November 20, 2015 on e-mail: [email protected].

This schedule may be changed. The dates of arrival, registration, and departure are final.