Posted on Saturday August 15th, 2015 by Vladimir Langin
Comments off 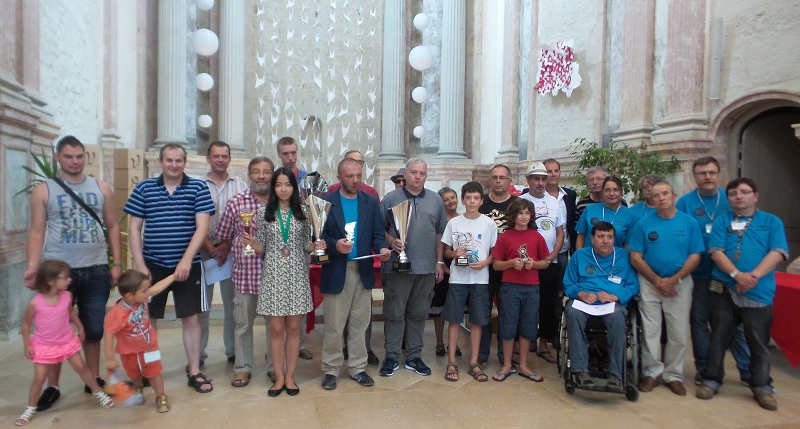 5th Stage of World Cup 2015 ended. Dmitry Melnikov won all the games in the finals and finished the 1st. Gennady Shapiro took second place after losing in the last match Dmitry Melnikov. Persistent struggle was for the 3rd place. Ekaterina Ivanova and Frank Laurent played draw in main  micro-match. The fate of the third place was decided in additional blitz. Ekaterina Ivanova won and took 3rd place.

At the closing of the competition, all participants received prizes provided by the city administration. The mayor presented the awards. The prize fund amounted to 1,000 euros. After closing all the participants have tried draughts cake, specially made for this event.

Blitz in Russian Draughts was held today. Dmitry Melnikov from Russia won. Gennady Shapiro from Germany took 2nd place and Krzysztof Juszczak from Poland took 3rd place. First stage of the classic program ended today. Next, the players will be divided into 2 subgroups of 8 players which  in 1/4 finals, 1/2 finals and finals will determinate places 1 to 8 and 9 to 16.

Blitz 144 was held today. 10 players participated.  The tournament was held on the Swiss system of 5 rounds. Ekaterina Ivanova surprisingly won the blitz with a score of 9 points out of 10. Franck Laurent took 2nd place and  Jacky Hannachi took 3rd place.

Competitions are held in Baume-les-Dames (France) from August 8 (arrival day) till August 15, 2015 (departure day).
Venue is Abbey of Baume-les-Dames
(http://www.besac.com/tourisme-besancon/abbaye-de-baume-les-dames/123.htm)

Competitions are held by the system of micro-matches consist of two games with draw according to the official table of the Section-64 in two types of programs:

The hotel is located 5 minutes from the game room. The price is € 45 for a double room.
The costs of accommodation, meals and travel of participants are paid by their sending organizations or at their own expenses.

It is possible to go from Paris to  Baume-les-Dames by TGV (high speed train: from Gare de Lyon). https://www.horairetrain.net/horaires-paris-baumelesdames-20150303-1000.html
It is possible to arrive from Basel, Switzerland.
You need to contact with the organizers for other possibilities.

For obtaining visas (up to July 01, 2015):  Gilles Taillandier [email protected]

For booking accommodation (up to July 01, 2015) and travel from Paris to Baume-les-Dames Franck Laurent [email protected]