Posted on Saturday July 11th, 2015 by Vladimir Langin
Comments off

Before the last round 5 players – Vladimir Skrabov, Ruslan Pescherov, Vitaly Egolin,  Dmitry Tsinman, Andrey Fedotov and Sergey Belosheyev  have 12 points. The winner of compepition will be determined tomorrow. 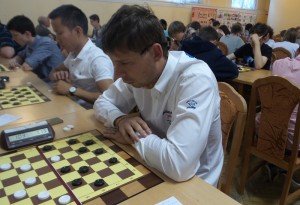 Blitz program started at 17.30. Blitz is held in Brazilian version of Draughts-64.

Opening of the competition was held at 12.00.

The list of women headed by the international grandmaster and former world champion among women Natalia Fedorova. With her will fight international master Anastasia Barysheva from Belarus, master FMJD Ekaterina Ivanova and others.

As part of the competition  traditional tournament in towers draughts was held today.

Place of registration and playing hall:

St. Petersburg State budget educational institution of additional education “SDYUSSHOR in Chess and Draughts” (Chigorin club) at:
Bolshaya Konyushennaya str. 25, St. Petersburg, Russia.
Credentials Committee will work July 4, from 16.00 till 20.00.
All participants must have medical insurance for the period of competition.

Following competitions are held:
1. 3rd Stage of World Cup.
2. Youth competitions for boys and girls 1999 year born and younger (with the offset of the age groups).
Team standing is determined in the youth competitions. The composition of teams is 3 boys and 1 girl.

All participants regardless of gender, age and rating are allowed to participate in the 3rd Stage of World Cup; in junior competitions – players born in 1999 and younger, who registered in accordance with this regulation time and paid the tournament fee. The number of participants representing the country is not limited.

Each participant of the competitions should pay organizational tournament fee at the day of arrival:
In 3rd Stage World Cup – 2 000 rub (~30 euro), for participants from St. Petersburg – 1500 rub;
Blitz – 500 rub.
In youth competitions – 1000 rub.

Determination of the winners

Participants who took 1-3 places in the 3rd Stage of World Cup are awarded with cups, medals and diplomas.
The prize fund of 3rd Stage of World Cup is not less than 65 000 rubles (1 000 euro).
Prizes are paid for highest classifications, the best woman, the best senior, the best junior and other prizes according to organizers decision.
Additional awards will be announced by organizers at the opening ceremony.

The team took 1st place in team standing is awarded cup and a diploma, the participants – diplomas.
Teams took 2-3 places and it participants are awarded with diplomas.

All costs of participants paid by sending organizations or yourself.

Applications for participation must be submitted to the office of IDF – FMJD Section-64 on e-mail: [email protected] not later than June 21, 2015.

Time schedule is approximate; dates and time of registration, opening and closing ceremony of the tournament are final.