Posted on Friday August 15th, 2014 by Vladimir Langin
Comments off

International Draughts Federation IDF – FMJD Section-64 in accordance with the calendar of the competitions in 2014 was held from August 10 (the day of arrival) to August 15, 2014 in Kazan (Russia) 4th Stage of World Cup 2014 in draughts-64 – 6th «Cup of information technology». Egorov Vladimir won. See results. 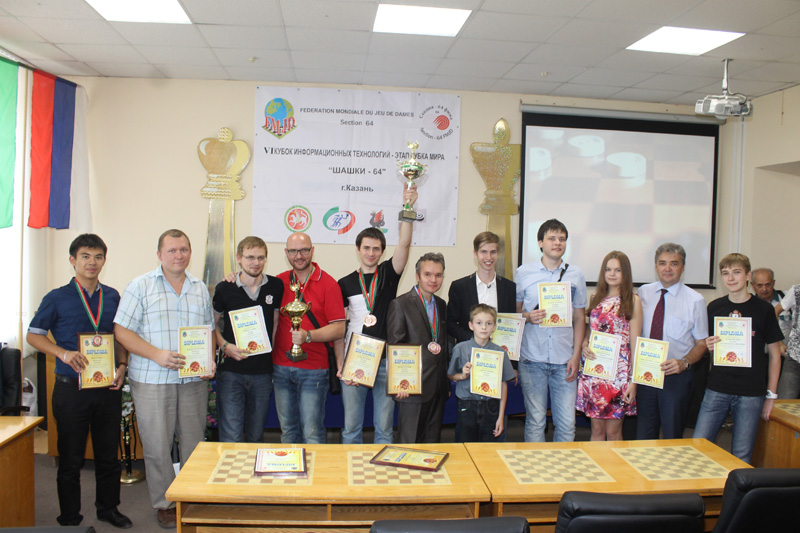 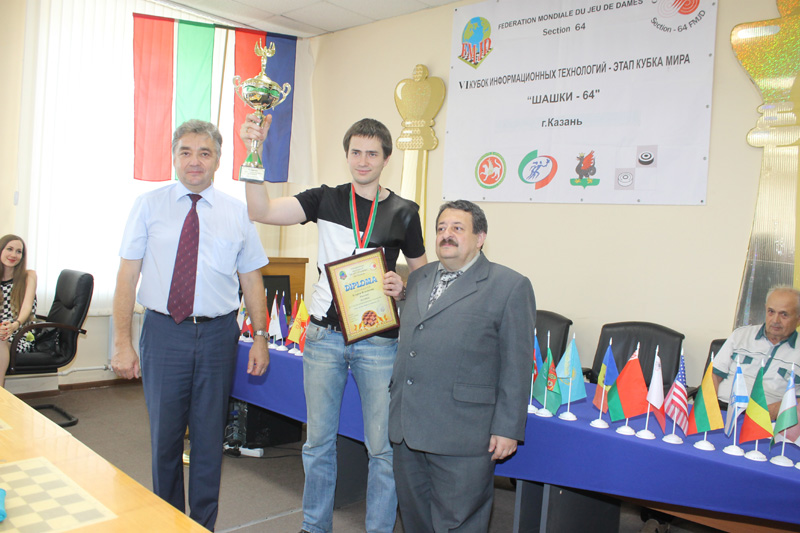 See more information about tournament (photo, press, etc.) on the website of Draughts Federation of the Republic of Tatarstan www.tatshashki.ru 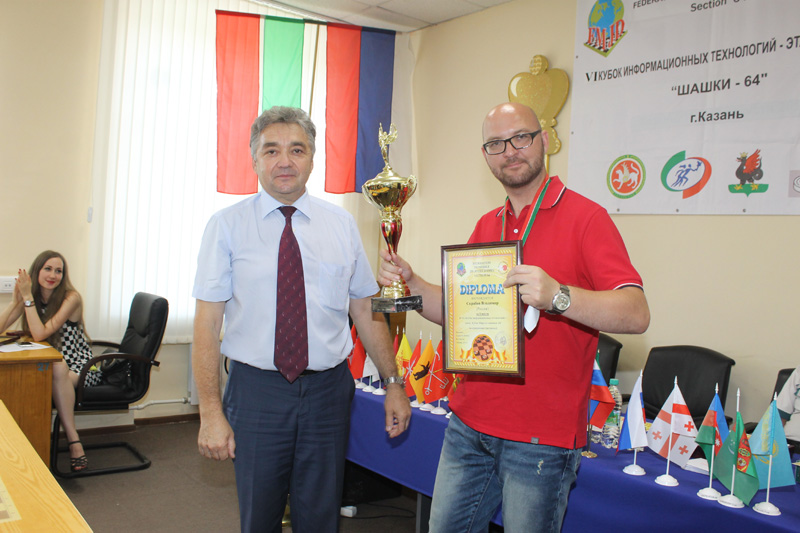 Organizers
The organizers of the tournament are:

Competitions are held from August 10 (the day of arrival) to August 15, 2014 in Kazan (Russia), in “TSSDYUSHSHOR of R.G.Nezhmetdinov” (Butlerova street, 7) – in front of the Kazan State Financial and Economic Institute.

All participants must register and pay tournament fee July 25 from 9:00 to 14:00 in the “TSSDYUSHSHOR
R.G.Nezhmetdinov” After that time players who not registered to participate in the tournament are not allowed.

The competition is open to all players, regardless of age and rating, with a sport category not less than the first, who paid entry fee and registered. The number of participants representing the country is not limited.

Competitions will be held on the Swiss system in 9 rounds according to the Section-64 rules.
The draw will be conducted by the computer program.

Competitions will be held in the Russian version of draughts-64 by the system of micro-matches consist of 4 games with the draw of the first move of white and black.

Protests against decisions of main referee must be submitted in writing to the chairman of the Appeals Committee within 30 minutes after the round. The appeal shall be accompanied by a pledge of 1 000 Russian rubles. If the protest is upheld, the applicant returns the full deposit
amount. If the protest is rejected the deposit amount is sent to the prize fund. Protests on computerized draw will not be accepted. The decision of the Appeals Committee is final.

1) Delay in the first game of micro-match on 30 minutes or more leads to the total defeat of the micro-match.
2) For the calling a mobile phone or any other electronic signal during the party player loses.
3) Never agree to a draw before the 20th move in the game.
4) Analysis of the party in the playing hall is not permitted.
5) It is strictly forbidden to be in the game room in a state of alcoholic and drugs.
6) In the case of the facts of contractual nature of the game main referee may decide to deduct the defeat to both players.
7) In the event of failure to appear in the game without prior notice to the referee, the participant is eliminated from the tournament.

Requests for accommodation must be submitted to July 25, 2014. After that date the tournament committee does not provide reservation of seats to accommodate the participants.

Tournament fee for all participants in blitz is 300 rubles.

TSSDYUSHSHOR  of R.G.Nezhmetdinov paid:
– Costs for food and accommodation for 10 foreign players (1 player on the country with a sport category not less than a master FMJD),
– Travel costs for 5 foreign players,
– All costs for main referee and costs for the work of referees,
– Costs for awards attributes (cups, medals and diplomas).

To receive fuller information on tournament and to submit the applications for participation and accommodation it is possible on the following contacts: